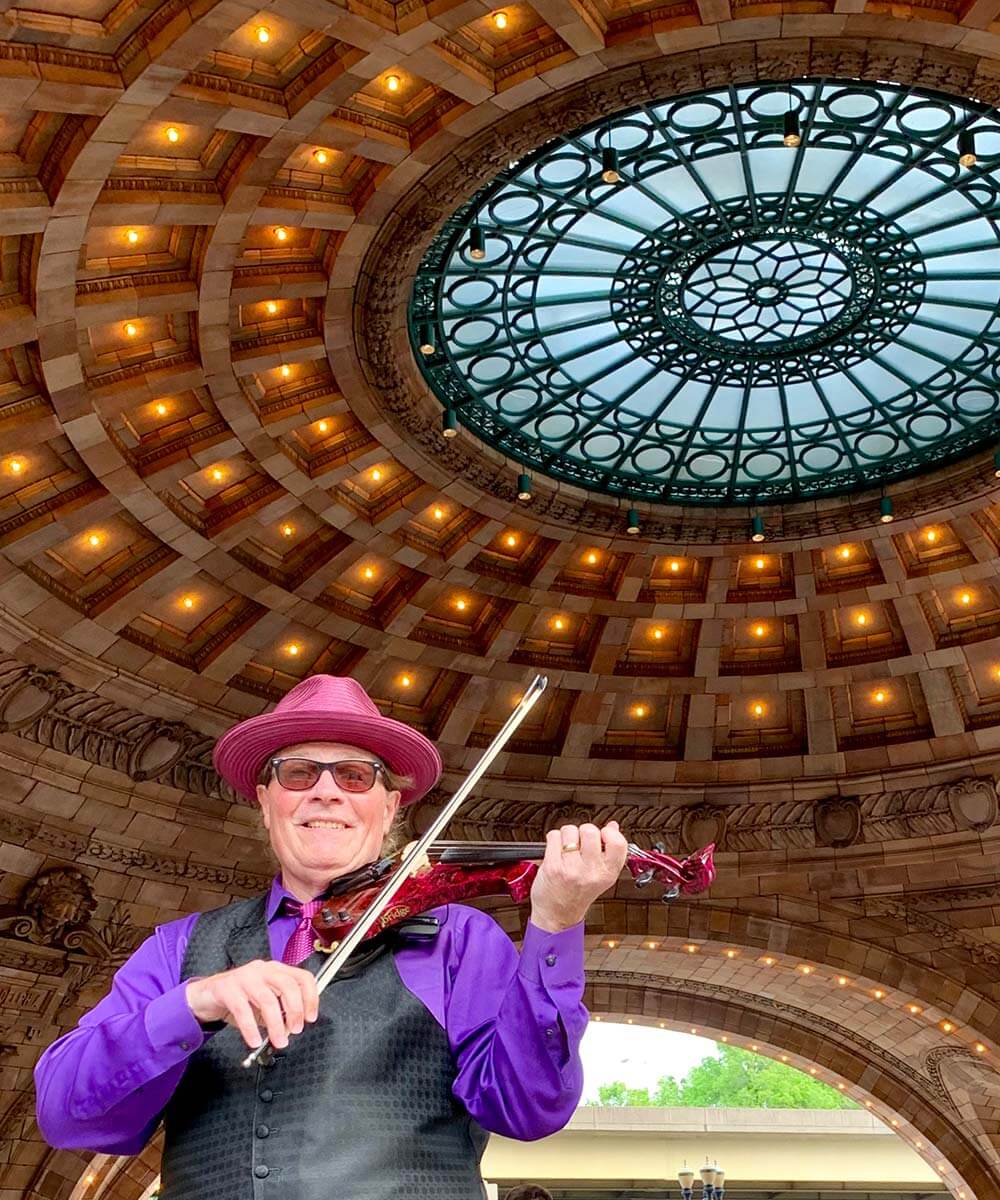 Music is my Super Power.

I play music because it moves me – and MY music moves YOU. On some nights, it’s like waving a magic wand over a crowd. We make people sing and dance, laugh and cry, remember and forget. If it didn’t, we wouldn’t be doing it right.

Our goal is to create memorable moments during some of the most important events in your personal and professional life.

About Steven Vance: How A Young Boy Got Hooked on the Violin

In 3rd grade, a music teacher from the public schools came into St. Ambrose Grade School to start a music program. She gave tests to all of the students in the 5th, 4th and 3rd grades. “Sing this song,” “Clap this rhythm,” and “Is this note higher or lower ?” She then chose 20 kids with the most musical inclination. I was NOT one of them. Fortunately, my Dad sent a note to the teacher that said he’d like to see me be part of the program if anything became available. A week later, one of the parents sent back a violin. The rest is history, and here I am decades and 4,500 gigs later, still going strong.

In grade school, I played Principal Viola for the All-City High School Orchestra as well as First Trumpet in my high school band – because we did not have a strings program. After that, I didn’t play a single note in college because I had discovered Rock ‘n’ Roll, Jazz, Bluegrass and other styles of music that moved me. Soon, I was General Manager of the college radio station and then became the head of the student Concert Programming Committee, producing sold-out shows with Chuck Mangione, Sea Level (with Chuck Leavell of the Allman Brothers Band and The Rolling Stones) and Sitarist Nikhil Banerjee.

After college, I got the urge to play again, so I brought my viola to where I was living in Allentown, PA and croaked out my first notes in five years. I remember hearing the windows of other apartments in the building closing as that instrument squeaked and squawked. Fortunately, I got better and met musicians there and at the Grand Canyon, where I lived for a year, and in Gainesville, FL, where I stayed for one lovely warm winter taking viola lessons and playing in the University of Florida Orchestra. 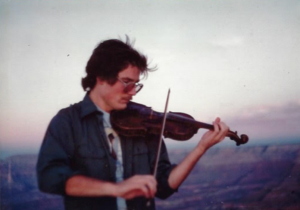 Returning home, I picked right up playing with a country band in every dive bar in the tri-state area. By chance, I took a job as maître d’ of a fine dining restaurant where there was a different piano player each night. When they found out I played the violin, I was encouraged to bring it in to play a few tunes during slow times. Soon, I was playing “Happy Birthday,” then “Happy Anniversary,” and then I was being asked, “Can you play at my wedding ?” That was the start of Steven Vance Strolling Violins and several thousand gigs of all types.

Once my schedule filled up, people asked if I could find another violinist for them. Then String Quartets. Then a Trumpet player. Then a Pianist. Eventually, I had a full roster of performers I was representing.

Doing so many weddings, I witnessed plenty of less-than-professional emcee work, so I floated the idea of a Violin & DJ Package. Boom—that took off, and now I am closing in on my 900th performance of that type. Currently, we have eight other DJs on our roster, with whom we match up fine musicians of various types.

The latest chapter in this saga is my PopRock Electric Violin innovation. I’ve always loved Contemporary Pop, Classic Rock, R&B, Latin, Sinatra and more, so when I discovered backing tracks were easy to find and I already had all of the equipment I needed, it was another “Aha!” moment. We now have about 10 Electric Violinists in three cities doing the same style of performance—and people LOVE it. I love doing it. It’s almost like having a band but without the hassles of having a band.

Since then, we’ve added photo booths and uplighting. Who knows what’s next ! 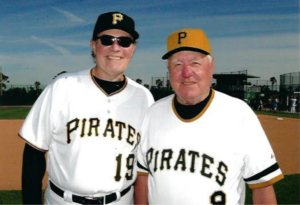 In my spare time I play baseball and softball. See my photo below with baseball legend Bill Mazeroski at Pirates Baseball Fantasy Camp, which I’ve attended for six years. My wife and I enjoy wines from around the world, traveling to Hawaii; Italy; Sonoma, CA, and making frequent trips to visit our daughter in San Diego. The rest of the time I go to concerts, duh.

I love playing the violin so much, I even started offering classes and workshops ! You can learn more on our violin lessons page.